A traced ray of sunshine

To start things off, we discussed/critiqued a couple of 3D designs students had been working on, including Ivy / Green Molecule and Blue-Hued Pyramid of Spheres.

Next,  I demonstrated another technique for making self-similar fractal images using scaling and translating of bitmaps - note quite the Droste effect, but related.  Here's an example involving a photo of Princess Gabrielle, a Siamese cat I have the pleasure of close acquaintance with. 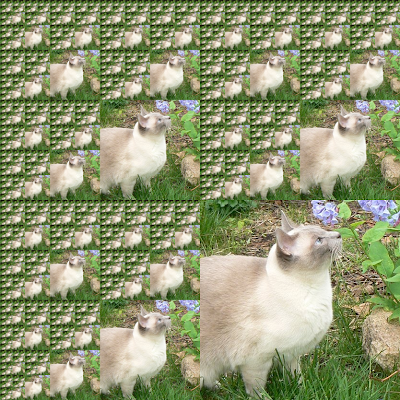 Can you find the Sierpinski Triangle lurking somewhere in there?

For the majority of the day, though, we moved on to discuss ray tracing, POV-Ray, and generating ray-traced images from NetLogo.  Here's an example of image-mapping the same photo used above onto several simple shapes, rendered with POV-Ray.

And another test image, the scene created with NetLogo, and rendered with POV-Ray.  The composition is rather random, I admit, but it shows off several ray-tracing features, including transparency, specular highlights, reflection, shadow, texture mapping, and using a "sky sphere" for background imagery. 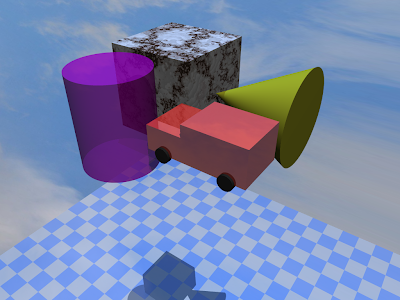 Tonight the students will be creating self-similar/fractal 3D shapes, which they will then render with ray tracing.  So keep an eye out for some neat imagery, which will surely be appearing on the student blogs soon!
Posted by Dr. Forrest Stonedahl at 6:09 PM